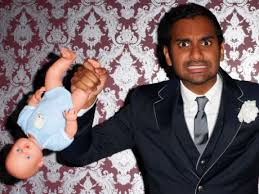 It’s been 2 and a half years at my current job, and I still can’t tell if having Friday’s off is a curse or a blessing since I binged watch comedy specials all day this Friday (again… curse or blessing?).

Even though the temperature was sunny and in the high 50s, this Friday afternoon was not quite wasted since I watched Aziz Ansari comedy specials and decided that he and I share a lot of relate-able experiences and viewpoints. Basically by experiences are a comedy special…. what is my life?

1. Girls always go for the douche bags. Sadly, I cannot disagree with this statement,  and I will humbly raise my hand above my head about 3 inches and turn my head the other way while shading my eyes with my other hand.

Ansari explains that there are two types of guys at the bar.

Yes, Ansari might have a point here but my theory is as follows. I will actually say that as a woman, nothing gets us more sexually frustrated than hot men that only talk to each other and totally ignore you. Maybe they don’t even ignore you, maybe they’ve looked your way and basically undressed you with their gaze, and yet they STILL do not come over to talk to you, giving you ample time to get boozed up and put on your douche bag stunner goggles, and all of a sudden all the “dumb dudes” look like gentleman.

2. Marriage is more outrageous than it seems. Ansari begs to ask the question, how did the idea of marriage even come up, and gives quite the possible scenario that brought structure to this ritual.

Man: “You know how we have been hanging out and spending time together. I want to keep doing it till you’re dead. Put this ring on your finger so people know we have an arrangement. That’s a priest. I want you to swear to God you won’t back out of this deal. That’s a cake with two tiny dolls that look like us. EAT A SLICE. Now feed a little bit me.”

The idea of marriage is fantastic, and I’m not going to claim to be one of those girls that crave an alternate lifestyle at all. I want to be married for sure, but nonetheless, it’s a societal structure that has become a norm. Biologically, humans are meant to be with multiple partners and to even have children with multiple partners. That makes the idea of marriage even MORE strange to me.

3. No sadder sign of the times then the increasing number of dick pics. Guys are texting pictures of their dick to women all the time. How did such a bizarre thing become such a common place. I’m just DYING for Aziz to include a bit on Tinder into his shows and if he needs any inspiration he can link back to my last Tinder Post.

4. Random roommates on Craiglist can be scary. This brought me significant worry, since in Boston, that is one of the only ways people, myself included, can find roommates now a days. Ansari’s horror story, made my Craigslist fears even more concrete.

The fact that now I have to start looking for a roommate for our lease in September makes this bit even more terrifying.

7. Being friends with your little cousin on Facebook can be horrifying. Ansari’s little cousin Harris lives in Georgia and to be perfectly honest, his comedy special made me think that one: Harris needs some friends and to stop feeding his anti-social Halo addiction, and two: that I need to think twice before following my family members on social media. My friend’s list is peppered with some cousins from Vietnam, my older cousins posting pictures with their kids, and my second cousins.

Now I’m not scared of them posting self quoting dark statuses such as “life’s dirty, you gotta play dirty to win it,” quite like Ansari, but I was petrified to see that my 11 year old cousin on Instagram had a girlfriend, or that my twin cousins that just celebrated their Sweet 16s this year just had their Junior Prom. These events don’t seem quite terrifying, but they make me feel Terrifyingly old. I can feel my eye sockets and rack sagging this very minute.

8. It’s a frustrating time to be single right now. A bunch of texting, miss communication and eventually ghosting. Ansari likens dating to being  a secretary for a shoddy organization, scheduling the dumbest shit with the flakest people ever. We’re also left trying to decipher if we are even on a date, because we go on these date-friend-hangout things. It could always be a date, but no one says that it’s a date.

Make sure you catch all of Aziz Ansari’s Comedy Specials such as Buried Alive, Intimate Moments for a Sensual Evening, and Dangerously Delicious on Netflix, especially if you have no life… like me.

Follow Twenty Something… What is my Life? on WordPress.com